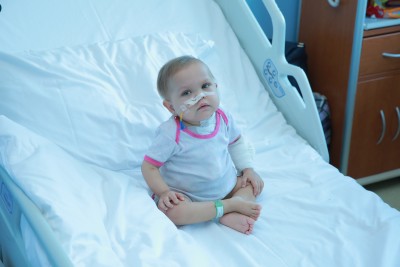 The Pediatric Nephrology Unit at Saint George Hospital University Medical Center received an exceptional pediatric case of a 3 years-old girl who underwent Hemodialysis despite her body weight of less than 8kgs.

Louna who is closely monitored by Dr. Antonio Azzi, Pediatric Nephrologist at SGHUMC, was born with dysplastic kidneys. She has been undergoing Peritoneal Dialysis since her first year.

Two types of dialysis techniques can be performed in children with renal failure as a conservative management plan preceding renal transplantation: Hemodialysis and Peritoneal Dialysis:

Hemodialysis is one of the most challenging and critical techniques, especially when performed in small children with low body weights with a high risk of complications like cardiac arrest, hypotension, cerebral stroke, blindness etc. This technique is considered to be dangerous when performed in patients weighing less than 10 kgs. This technique needs special expertise with adapted material.

Louna has acquired an infection in her abdomen which forced the Pediatric Nephrology Team to take the decision to remove the peritoneal catheter and wait for an interval of a two weeks recovery period from the infection. Therefore, Hemodialysis was the only choice for the medical team as per the patient's care plan.

Due to the efforts of the Pediatric Nephrology Team and the Hemodialysis Department at Saint George Hospital University Medical Center, and under the supervision of Dr. Antonio Azzi, a success story has been recorded for the first time in Lebanon on baby girl weighing less than 8 kgs who underwent Hemodialysis at SGHUMC.

We would like to thank the Pediatric Nephrology Team at SGHUMC for their efforts and emphasis on providing the best treatment modalities for such an important case, hoping that Louna will recover rapidly, and will benefit from a kidney transplant in the near future.