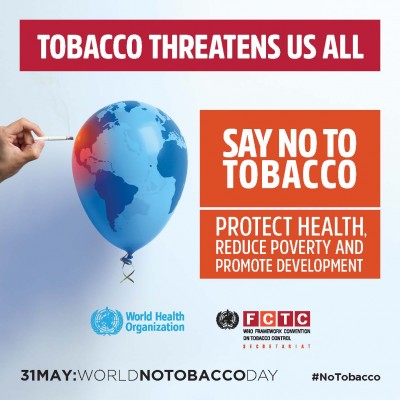 Tobacco – a threat to development

Every year, on 31 May, WHO and partners mark World No Tobacco Day (WNTD), highlighting the health and additional risks associated with tobacco use, and advocating for effective policies to reduce tobacco consumption.

The theme for World No Tobacco Day 2017 is "Tobacco – a threat to development."

Goals of the World No Tobacco Day 2017 campaign

WHO is calling on countries to prioritize and accelerate tobacco control efforts as part of their responses to the 2030 Agenda for Sustainable Development.

All countries benefit from successfully controlling the tobacco epidemic, above all by protecting their citizens from the harms of tobacco use and reducing its economic toll on national economies. The aim of the Sustainable Development Agenda, and its 17 global goals, is to ensure that "no one is left behind."

Tobacco control has been enshrined in the Sustainable Development Agenda. It is seen as one of the most effective means to help achieve SDG target 3.4 of a one-third reduction globally, by 2030, of premature deaths from noncommunicable diseases (NCDs), including cardiovascular disease, cancers and chronic obstructed pulmonary disease. Strengthening implementation of the WHO Framework Convention on Tobacco in all countries is an additional target to be met by governments developing national sustainable development responses.

Tobacco control can break the cycle of poverty, contribute to ending hunger, promote sustainable agriculture and economic growth, and combat climate change. Increasing taxes on tobacco products can also be used to finance universal health coverage and other development programs of the government.

It is not only governments who can step up tobacco control efforts: people can contribute on an individual level to making a sustainable, tobacco-free world. People can commit to never take up tobacco products. Those who do use tobacco can quit the habit, or seek help in doing so, which will in turn protect their health as well as people exposed to second-hand smoke, including children, other family members and friends. Money not spent on tobacco can be, in turn, used for other essential uses, including the purchase of healthy food, healthcare and education.

Facts about tobacco, tobacco control and the development goals