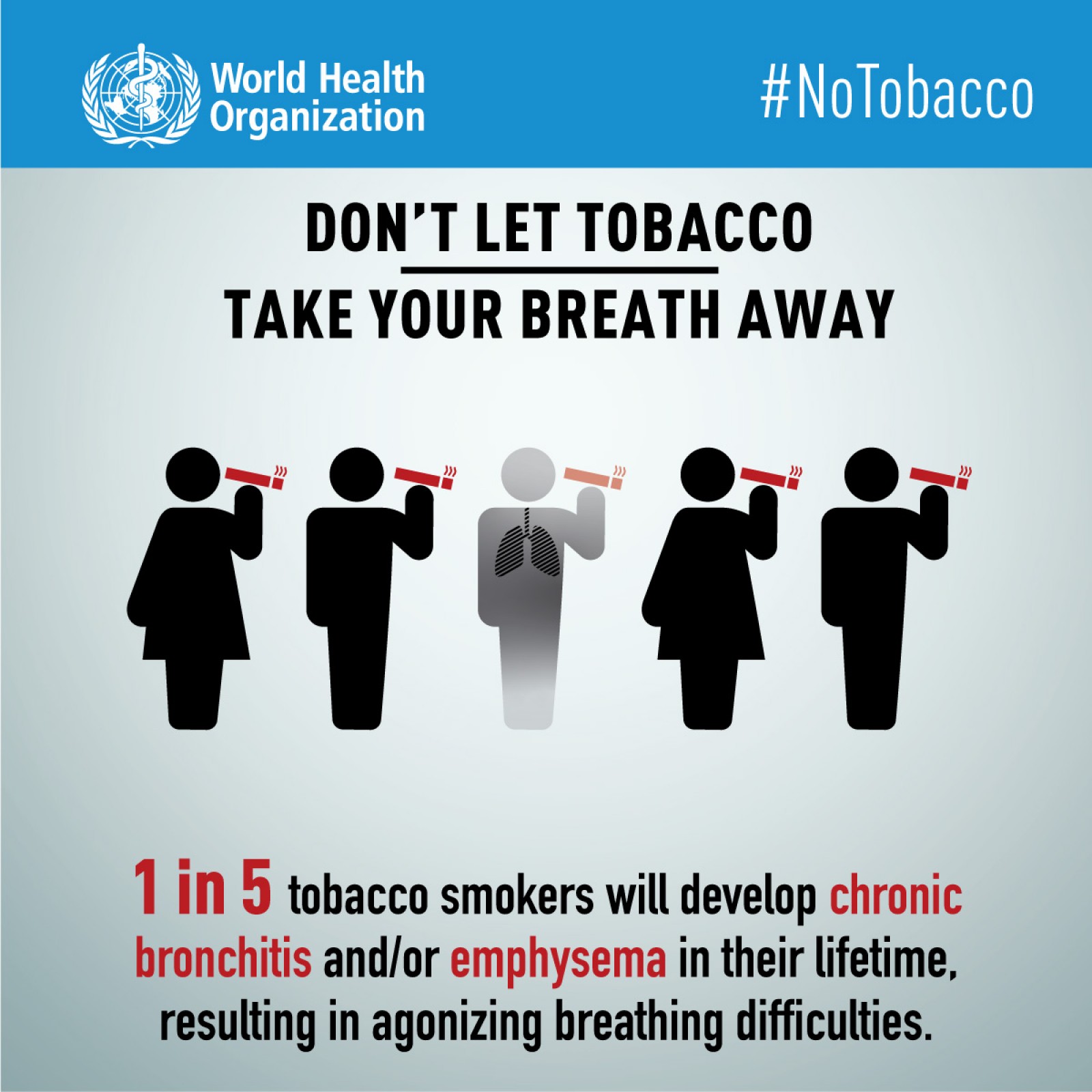 Every year, on 31 May, the World Health Organization (WHO) and global partners celebrate World No Tobacco Day (WNTD). The annual campaign is an opportunity to raise awareness on the harmful and deadly effects of tobacco use and second-hand smoke exposure, and to discourage the use of tobacco in any form.

About the campaign: How tobacco endangers the lung health of people worldwide

World No Tobacco Day 2019 will focus on the multiple ways that exposure to tobacco affects the health of people’s lungs worldwide.
These include:

Chronic respiratory disease. Tobacco smoking is the leading cause of chronic obstructive pulmonary disease (COPD), a condition where the build-up of pus-filled mucus in the lungs results in a painful cough and agonizing breathing difficulties. The risk of developing COPD is particularly high among individuals who start smoking at a young age, as tobacco smoke significantly slows lung development. Tobacco also exacerbates asthma, which restricts activity and contributes to disability. Early smoking cessation is the most effective treatment for slowing the progression of COPD and improving asthma symptoms.

Across the life-course. Infants exposed in-utero to tobacco smoke toxins, through maternal smoking or maternal exposure to second-hand smoke, frequently experience reduced lung growth and function. Young children exposed to second-hand smoke are at risk of the onset and exacerbation of asthma, pneumonia and bronchitis, and frequent lower respiratory infections.

Globally, an estimated 60 000 children die before the age of 5 of lower respiratory infections caused by second-hand smoke. Those who live on into adulthood continue to suffer the health consequences of second-hand smoke exposure, as frequent lower respiratory infections in early childhood significantly increase risk of developing COPD in adulthood.

Tuberculosis. Tuberculosis (TB) damages the lungs and reduces lung function, which is further exacerbated by tobacco smoking. The chemical components of tobacco smoke can trigger latent infections of TB, which around a quarter of all people are infected with. Active TB, compounded by the damaging lung health effects of tobacco smoking, substantially increases risk of disability and death from respiratory failure.

Air pollution. Tobacco smoke is a very dangerous form of indoor air pollution: it contains over 7 000 chemicals, 69 of which are known to cause cancer. Though smoke may be invisible and odourless, it can linger in the air for up to five hours, putting those exposed at risk of lung cancer, chronic respiratory diseases, and reduced lung function.

Goals of the World No Tobacco Day 2019 campaign

The most effective measure to improve lung health is to reduce tobacco use and second-hand smoke exposure. But knowledge among large sections of the general public, and particularly among smokers, on the implications for the health of people’s lungs from tobacco smoking and second-hand smoke exposure is low in some countries. Despite strong evidence of the harms of tobacco on lung health, the potential of tobacco control for improving lung health remains underestimated.

The World No Tobacco Day 2019 campaign will raise awareness on the:

✔ Awareness on the particular dangers of tobacco smoking to lung health;

✔ Magnitude of death and illness globally from lung diseases caused by tobacco, including chronic respiratory diseases and lung cancer;

✔ Emerging evidence on the link between tobacco smoking and tuberculosis deaths;

✔ Implications of second-hand exposure for lung health of people across age groups;

✔ Importance of lung health to achieving overall health and well-being;

✔ Feasible actions and measures that key audiences, including the public and governments, can take to reduce the risks to lung health posed by tobacco.