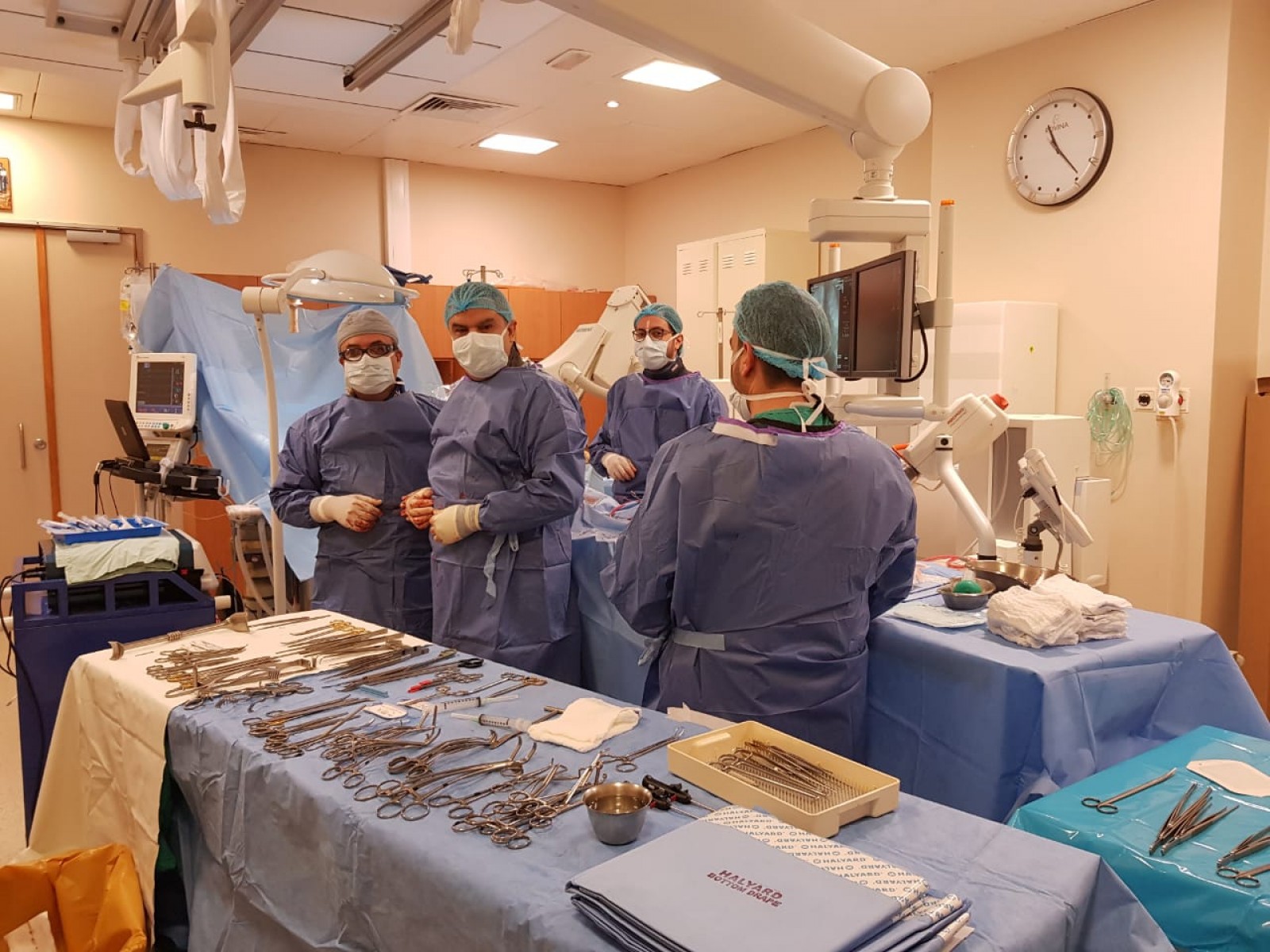 Prof. Michel Feghaly, head of the Vascular Surgery Division, and Prof. Abbas Chamseddine, Interventional Radiologist at Saint George Hospital University Medical Center recently performed, for the first time in Lebanon, placement of a T-Branch aortic stent graft for treatment of a thoracoabdominal aortic aneurysm.
The device is placed within a thoracoabdominal aortic aneurysm to seal off the aneurysm. The graft is a tube made of polyester graft material (fabric). These self-expanding stents provide support. The graft extends from the aorta around the celiac artery, into both iliac arteries.

Over the past 20 years, ballooning of the aorta called aneurysm has been treated with increasing numbers using a graft mounted on a stent (a stent graft) which is inserted through a small incision in the groin. However these stent grafts require that the aneurysm be present below the renal arteries by a certain distance and that the aneurysm does not extend to the arteries of the kidneys and bowel.

It should be mentioned that this technique was implemented in February 2000 by the Vascular Surgery team with Professor Michel Feghali at Saint George Hospital University Medical Center and it was the first of its kind in the Middle East.

In a similar picture, aneurysms of the upper aspect of the aorta (thoracic aorta), have been recently treated with a stent graft which also requires the aneurysm not involving the arteries on either side of the aneurysm by a certain distance (the arteries of the head and the ones below, the arteries of the bowel). Patients with an aneurysm involving the thoracic and abdominal aorta are excluded from treatment using a stent graft and usually have no other choice but surgery which replaces the entire aorta and leads to surgical re-implantation of the bowel and kidney arteries in the newly placed “aorta’. This surgery is risky and could carry the risk of paralysis or death.

A 74 year male patient with a thoracoabdominal aneurysm was treated by Drs Abbas Chamseddine and Michel Feghaly at SGHUMC using a specially designed stent graft which has pre-designed branches that fit into the bowel and kidney arteries and are connected using small stents so blood keeps flowing into these vital organs. The procedure, a first in Lebanon, was a great success and the patient left the hospital after 3 days.

“Our growing experience in this field has allowed us to introduce this branched endografts technology to Lebanon and use it, which will save many patients from having to travel abroad seeking this therapy”, Professor Michel Feghali said. “The procedure is a life saver for many and we are proud to be pioneers in the country in making this therapy available”, said Pr. Abbas Chamseddine. Certainly many patients with thoracoabdominal aneurysms will be happy to hear that this therapy is available at Saint George Hospital University Medical Center - Beirut.