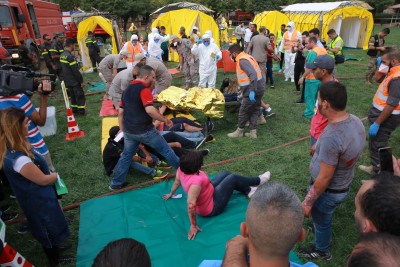 An impressive drill in the presence of the Minister of Public Health, Mr. Ghassan Hasbani, and other local and regional dignitaries. LEAEM-SGHUMC team headed by Mr. Georges Saad, Director of LEAEM was formed from 32 persons, with 45 EMS vehicles, more than 20 vehicles from the Civil Defense and over 15 vehicles from the Lebanese Armed Forces (LAF). Notwithstanding Helicopter's landings and other emergency maneuvering.

A class A drill with all of its components and synchronicity. Keep going!